In this page, you will find:

Fast Data is based on a group of services that communicate with each other via events sent on Kafka or MongoDB, and persisting Projections and Single Views on MongoDB. This architectural setup allows for great horizontal scalability. 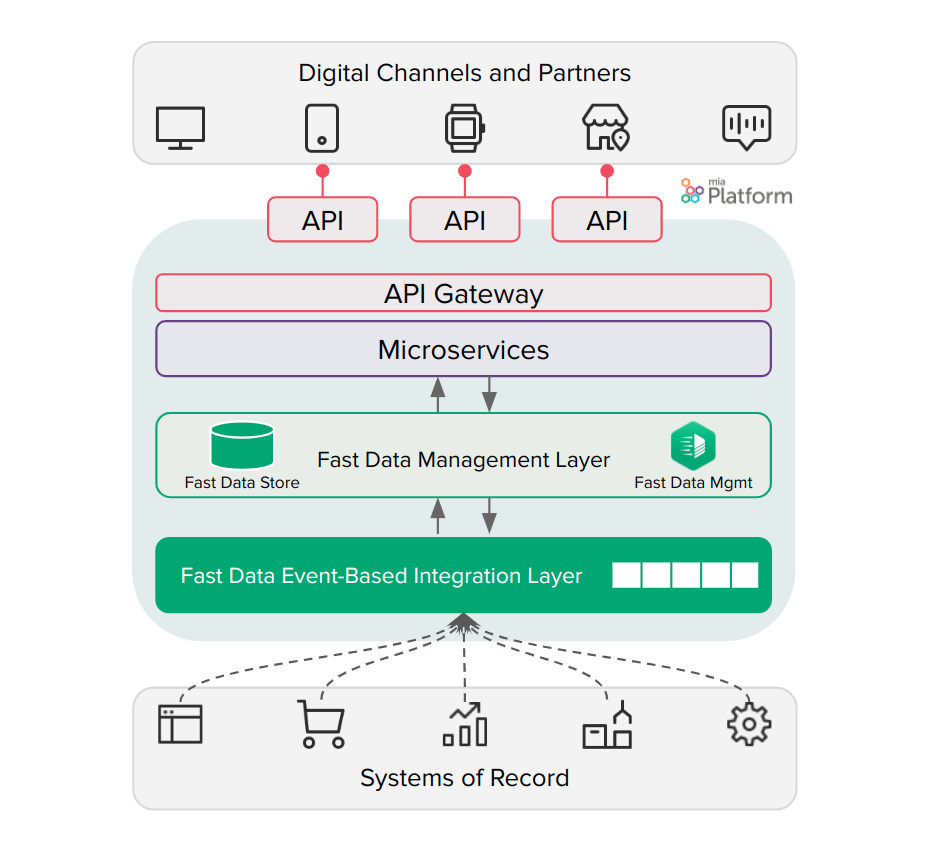 The Real Time Updater is responsible for listening to the events concerning changes to the SoR and updating the Projections accordingly. Optionally, the RTU can perform other activities:

It is up to you to decide whether to make it execute any of these, based on the architecture you prefer to build. For example, if having your Projections up to date in a very short period of time is crucial for your business, you might want to skip the part where you check which Single Views should be updated, delegating this job to the Single View Trigger and decreasing the overhead of the RTU.

The Single View Trigger listens to Projection Update events, performing the logic needed to get the identifiers of all the Single Views that need to be updated, and emits the relevant Projection Change events. This activity can be performed by the RTU as well. Using the SVT is recommended for a faster update of Projections, and a greater fault tolerance for the RTU.

Fast Data revolves around three major technologies: Kubernetes, Kafka, and MongoDB. The Kubernetes part is pretty much standard, and thanks to the Console you won't need to directly deal with it, but will still enjoy all the advantages it has to offer.

On the other hand, Kafka and MongoDB can be used in different steps of the process, and are thus discussed in the following subsections.

Kafka is very reliable, and has a great support for topic partitioning. This enables horizontal scalability, since it is possible to have multiple replicas of the same service: each replica will read from its own partition, granting all the required properties and speeding up the process. This way, it is as close to being real-time as possible.

MongoDB is a non-relational data store, used for storing Projections, Single Views, and some intermediate data, namely Projection Change and Single View Error collections. In the case of Fast Data, the Projection and Single View collections are saved in a format that is compatible with the CRUD service, which opens a ton of possibilities for exposing new services and consuming data in innovative ways.

MongoDB is great for horizontal scalability.

Since the MongoDB collections are compatible with the CRUD Service and are automatically registered by the Console, they are ready to be exposed as APIs and are easily customizable (e.g. adding indexes just requires a few clicks in the Console). This allows you to easily connect them to the CMS, your applications, analytics, and third party software.

Putting it all together​

Fast Data architecture is rather streamlined, with just a couple of pivoting points. A regular flow of information follows this path:

There are no hard constraints, but generally all the services belong to the same Kubernetes namespace, while the MongoDB and Kafka instances can be on managed hosts, on the same cluster, on premise, etc.

The SoRs usually belong to a different network portion, far from all the processing logics, since they must be kept independent of all the Fast Data flow, with the only exception of the CDC being connected to them.