Deploy is the Console Area that allows developers to deploy configurations of a specific project on different runtime environments. It can also be used to visualize the history of previous releases on that project.

This section allows you to follow in a simple and effective way a Continuous Deployment approach, integrating automated tests and releasing new code versions without damaging the existing project.

The Deploy Area is divided into two Sections: Deploy and History. When a user enters the Deploy Area, they are automatically led to Deploy Section.

This section is tied to a specific environment, which can be changed using the dropdown menu on the right side of the topbar. Once you have selected in which runtime environment you want to release your project configurations and which branch to deploy, you will be able to start the deployment process.

With the relative dropdown menu in the top-right position of the topbar, it is possible to select the runtime environment in which you want to deploy your project.

The information you will see in this card are:

In the second card, you can choose the branch to be released.

Once the branch is selected the console will show:

Once you have selected the branch and the runtime environment, the deploy page will load a card containing additional deployment details.

In particular, this card will show a comparison between the services that are going to be released and those that are currently running in the selected runtime environment. This card will let you decide the deployment strategy, smart deploy or deploy all, and the ability to always release services that do not follow semantic versioning.

In this section you will be able to access the following information:

Please note that using an environment variable to define the version will cause the inability to trace the correct version number.

The card will show only the builds of the services whose link to the repo is known by the platform. This condition includes all the services created using the console either starting from an example or a template created after April 30th, 2020. 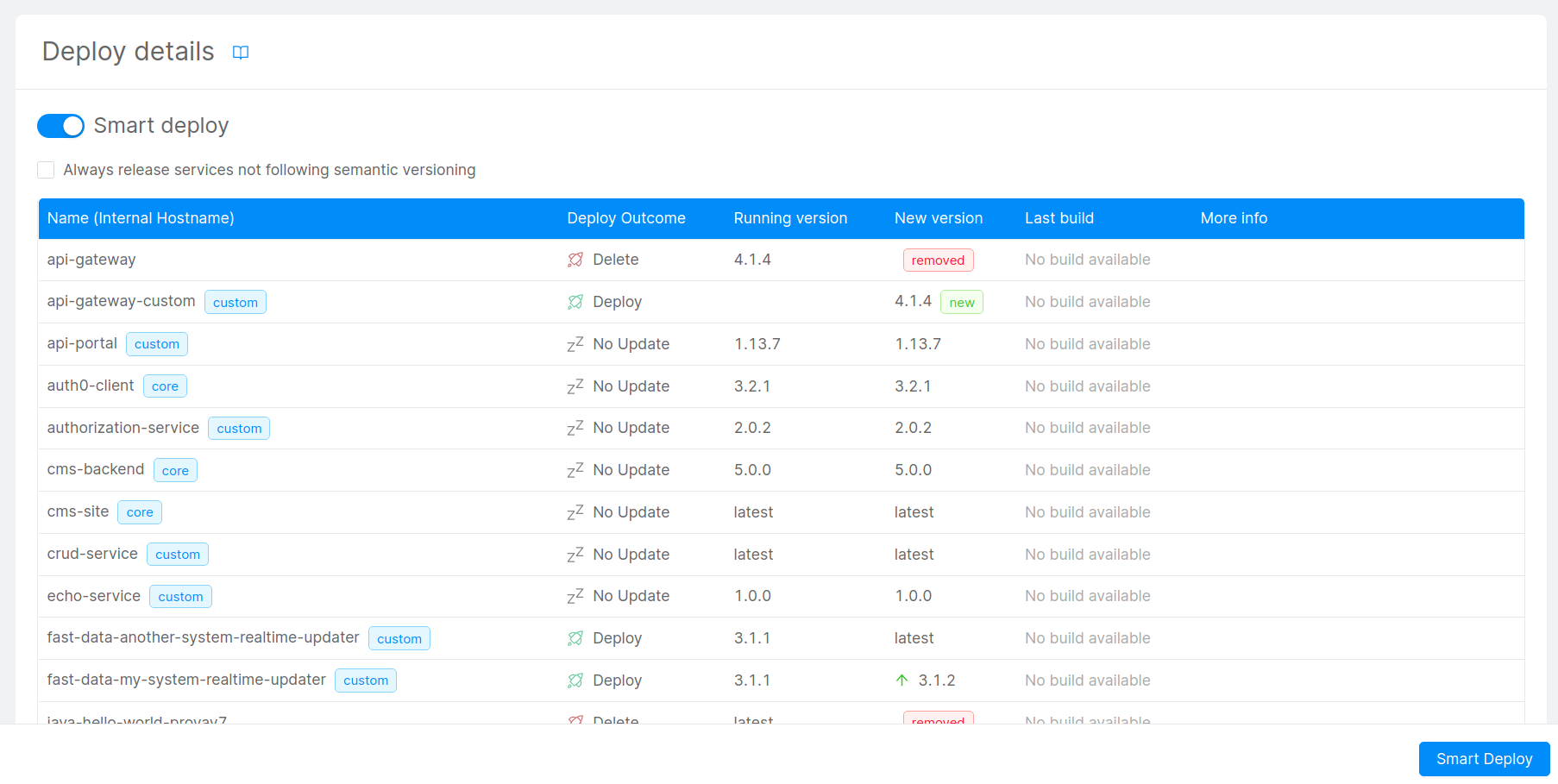 At this point, once you have verified the information, you can deploy your configurations.

By toggling the appropriate switch you can activate/deactivate the Smart Deploy functionality.

This functionality will let you release your microservices in a smart way, since only the updated services will be deployed through the console.

Smart Deploy leverages Kubernetes deployment strategies to ensure that only necessary Pods are recreated. During each deploy updated pods get replicated to prevent disservice, however, on big projects, this might avoid huge resource consumption spikes or longer deployment times.

This feature can be activated only in projects using mlp, the Mia-Platform official command line deployment tool.

It is important to save the configuration at least one time after the feature smart deploy has been activated. This operation will help avoid inconsistent behaviors when deploying your services.

In order to avoid unnecessary deployments, services created using an advanced configuration should be manually modified by removing all the old interpolated annotations.

When deploying for the first time using this feature, some services might not be able to collect all the necessary information to show the effective deployment strategy adopted. However, service that do not show actual differences on the cluster will not be deployed.

It is highly recommended not to do actions such as modifying a version, an env var, a configmap directly on the cluster, otherwise the checksum that is generated at the deployment does not work correctly and consequently the information reported in the Deploy details table will be misleading.

By deselecting the Smart Deploy toggle, you will switch to Deploy all strategy.

Smart deploy is enabled by default, if you want to force a deploy of all the services you should disable the toggle.

This strategy does not check if a microservice configuration has been updated and directly schedules the deployment of all the services. In big projects this might cause resource consumption spikes and longer deployment times. However, it can be useful to ensure a new and clean deployment environment.

The column Deploy outcome will help you understand which services will be deployed or deleted by pressing the deploy button.

An incomplete deploy outcome column might indicate the configuration has not been properly saved.

Please notice that this represents the impossibility to provide a complete preview, however, the smart deploy feature will still deploy the modified services.

If a microservice has interpolated environment variables and one of them is modified, the service will be deployed again even if the Deploy outcome column shows No update.

By checking the dedicated checkbox you can force the deployment of microservices that do not follow semantic versioning.

If you are not following sematic versioning, for example using image:latest or image:branchName, you can force the deployment by using the dedicated checkbox.

It is not recommended to activate the checkbox in a production runtime environment, because if some of your services by mistake have a pre-release or latest version tag they will be redeployed.

The History Page is the second area of the Deploy section. In this tab it will be possible to visualize all the released deploy.

In the History table the user will be able to visualize the following information: