Skip to main content
This is documentation for Mia-Platform Documentation 8.9.x, which is no longer actively maintained.
For up-to-date documentation, see the latest version (9.x (Current)).
Version: 8.9.x

What is a cast function and why I need it?​

Different kinds of table could store data in many ways. You could have a numeric value stored as a string that was supposed to be an integer, or you could also have a date field stored in different formats in different tables, but you would like to have date fields all in the same format (for example you receive a date with the format YYYYMMDD and you want to cast it to ISO format).

This enables you to define the output format and type of the imported fields.

Since JavaScript is untyped, a conversion function needs some care to be implemented correctly 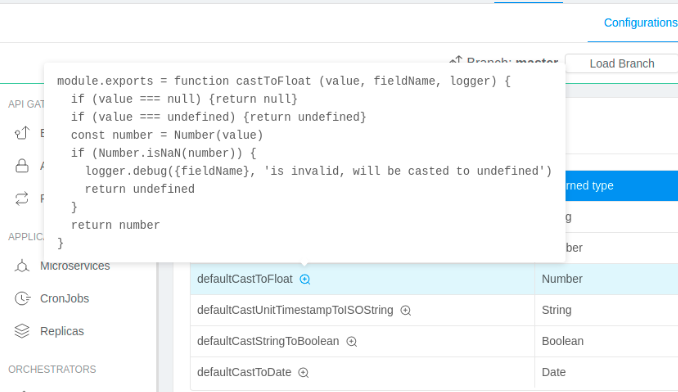 If you need more control over the casting of your data, you can also create your custom cast functions.

If the value to cast is invalid (e.g. a character as input of a cast to defaultCastToInteger), all default cast functions return undefined or null, based on the cases. These fallback values are saved as NULL in MongoDB.
Be aware of that if your fields are not nullable, in these cases you should define your own Custom Cast Functions with the fallback you need.

As you can see in the example above, the cast function accepts three arguments:

To know the technical limitation you have in your cast function, read here

How and when are the Default Cast Functions updated?​

What happens when the Console changes the default cast function?

The implementation of a default cast Function is changed, but the name castFunctionId is unchanged​

In this case, nothing will change in your configuration. You will continue to use the same implementation you had before.

In this case, the new cast function will be added to your configuration.

If a new default cast function is added on the Console, it will be available in the Cast Function section when you visit the Design area (even if it is not yet stored on your git provider in your fastdata-config.json). When you save the configuration it will be stored in the configuration file.

A default cast function is deleted​

In this case, although a default cast function has been deleted from which Console generates, it will still be available in your configuration (e.g.: Console removes defaultCastUnitTimestampToISOString). Let's see an example: 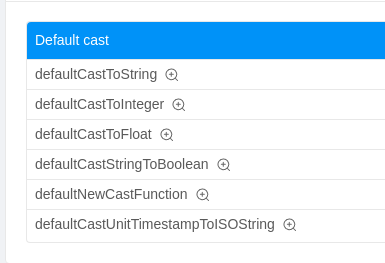 In your custom cast functions you can import only the node modules present in the following list:

It is used the node version 12.