In this page will be explained the how the Flow Manager works.

As mentioned in the service introduction, the Flow Manager is based on a Finite State Machine.

More precisely it receives a finite state machine in a configuration file (in a section of it) and, thanks to it, can handle the Saga flow how described into the machine.

The Flow Manager is not capable to understand if a finite state machine is a valid one, if there are loops and so on, it just configures itself and follows the configured flow.

Every state of the machine can have its properties, for example:

Look at the machine definition configuration section for more technical details on how to configure your Finite State Machine.

The Flow Manager has the concept of Business States, useful to discern the internal states (of the Finite State Machine) to the states that matter for the business.

Each business state can contain one or more states of the machine.

"States that matter for the business" means that a business state represents a state of the Saga that is not "Intermediate", that symbolizes what is the whole saga status.

Let's explain it with an example based on the usual Finite State Machine (the businessStates are the numbers in each state): 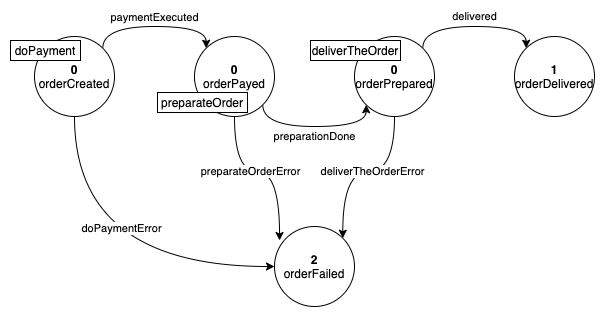 The image above contains all the internal states of the Saga, but not all states could be important for the business. For example, the business could care about:

In this way the users can look for successfully completed orders just by looking for the orders with businessState set to 1.

The business states are a superset of the machine that represents the states of the saga that matter for its business.

Another key concept of the Flow Manager is the one of Business Events, a way of grouping the internal events into business relevant ones.

Each business event can be associated to one or more events.

The concept is explained in the following example based on the usual Finite State Machine (the businessEvents are the numbered ones):

In the image above, the events belonging to the same business event are grouped by color. As shown, not all the internal events are important for the business. For example, paymenExecuted and preparationDone do not give any business relevant information, while delivered does since it sums the success of the whole project.

The Flow Manager, to correctly handle the saga flow, needs the support of other actors, or, microservices that execute the tasks to move forward the saga.

To do this, the service uses the command/event approach, or:

If a command execution fails, an error event will be sent by the executor actor instead of the done event; in this case, the possible management of the error state is delegated to the user that writes the Flow Manager configurations file (to go, for example, in a error state with remediations actions).

NB. if an event is unexpected in the current state, the Flow Manager will log an error and will ignore it.

Usually the following are the best practices for events and commands:

Following some sample flow based on the following finite state machine, in which the rectangles indicate the commands of each state:

In this case the Flow Manager, while in orderCreated state, was expecting a paymentExecuted event to continue, like specified in the configurations file; it received the preparationDone event instead and, since this event was unexpected, the Flow Manager simply ignores it and logs an error.

The Flow Manager is a platform core service and this implies that it must be generic and configurable with each Saga flow.

For this reason the service is agnostic and does not know anything about the data related to the saga, but how can it handle it so?

It handles the saga data with the concept of metadata.

The metadata are all the data strictly related to the specific saga, different for each Saga flow, e.g:

The saga data is split, to allow the Flow Manager to be generic, in a static part and in a dynamic part.

The static part is the common Saga data, or, data that all sagas have:

The history of the saga consists in the list of all the occurred states and events saved in chronological order. It has the following structure:

The purpose of the Flow Manager is to guarantee the data consistency.

To do this, the service should be the only one to manipulate the Saga's data and metadata.

Actually the service can be the only one to read the data too, because it makes sure to provide all metadata to other services.

Specifically the service does the following steps to ensure the data consistency:

With the behavior explained above, the Flow Manager can guarantee:

Obviusly some other service could need to read from the Saga's database, it's not a problem, the important thing is that the Flow Manager should be the only one to write on it.

The Flow Manager has not a direct link to the database, because it does not know the kind of the database and so on.

To read/write data it needs another actor, the Persistency Manager (configured into the configurations file).

The tasks of the Persistency Manager are to: